A blue-green algal bloom in the Rietvlei Water Area resulted in its closure since 17/03/2017.


It remained closed for public safety reasons throughout this quarter. The water was only reopened to the public again on 30/06/2017 after a consistent decline in the algae toxins was observed.

The water was visibly green (sometimes almost opaque) and at certain times there were very toxic bluegreen scum layers that formed on the shoreline. Samples from these scum layers (sample code: RTV21) were analysed, and the toxin levels were almost as high as 1600 micrograms of microcystin toxin per liter at times.

This exceeded the World Health Organisation’s (WHO) guidelines for recreational water bodies by two orders of magnitude (see Figure 2 below). 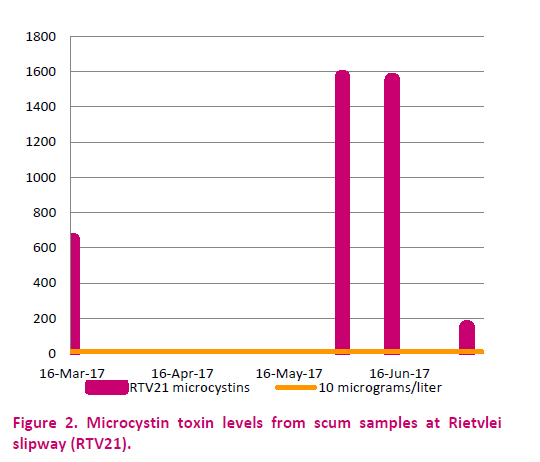 Apart from the scum samples, weekly water samples from the Milnerton Aquatic Club shoreline (sample code: MAC) and the Rietvlei jetty (sample code: RTV02) were analysed and graphs of the trends in the various parameters were maintained. The total count of blue-green algae (Cyanophyceae) cells as well as chlorophyll levels fluctuated throughout this quarter, but remained high. This indicated that blue-green algal bloom was persistent (see Figures 3 and 4). 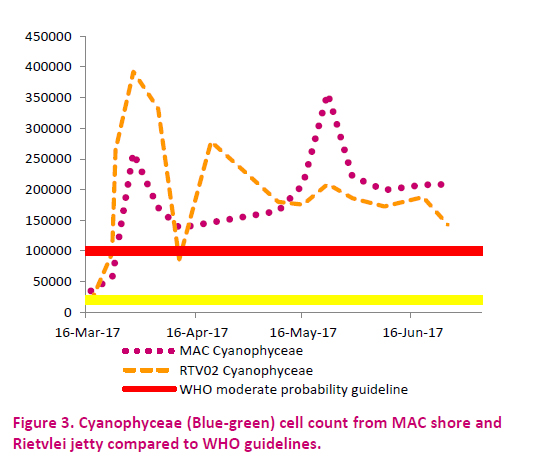 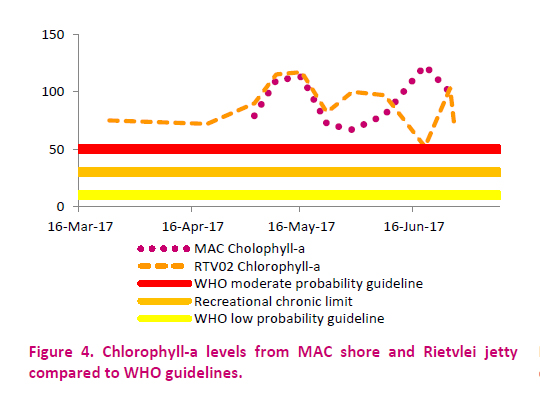 The most important parameter, however, was the microcystin toxins that are released from the algae cells.  Results indicated a gradual and consistent decline in these toxins over a period of three months, even though some fluctuations were observed at times. The fluctuations could have been caused by variations in the ambient temperature, the amount of light exposure and light penetration into the water, as well as the effects of wind.

Towards the end of the quarter it became clear that, despite there being high levels of algae in the water, the quality approached the standard of drinking water (1 microgram of microcystin toxin per liter) (see Figure 4 below). 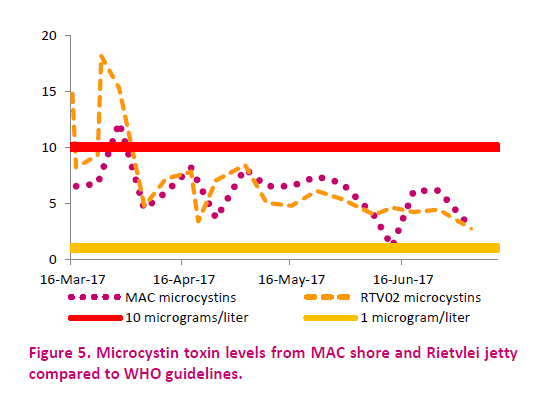 This justified the re-opening of the water to the public.