Pls Do Not Feed The Wildlife 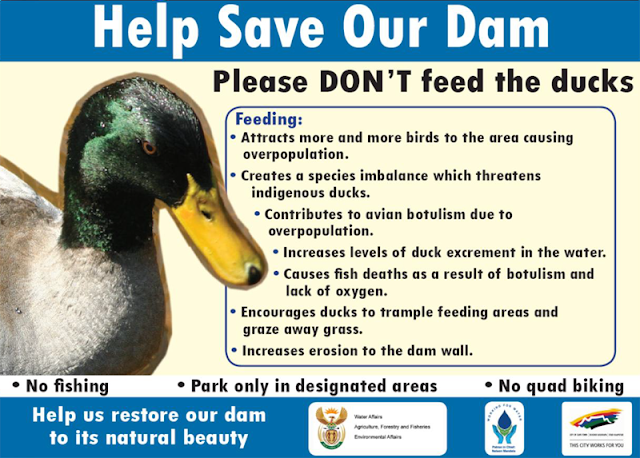 WHY PEOPLE SHOULD NOT FEED WATERFOWL AND OTHER BIRDS

Feeding waterfowl and other birds such as guinea fowl is a popular activity for some people. Tossing food like bread, table scraps, corn or popcorn attracts ducks, geese and other birds to places like dams, parks and ponds.

Feeding these birds is a popular pastime and a relaxing activity bringing people closer to nature, or a fun activity for children wanting to interact with wildlife. However, feeding the city’s waterfowl and guinea fowl can lead to a number of problems and even be harmful to the birds themselves.

Why is feeding water fowl and other birds a problem?

The City of Cape Town manages public areas for the benefit of residents and when overpopulation of waterfowl or other birds such as guinea fowl occurs, these areas become unsanitary and unpleasant to use due to the droppings, feathers, trampling and erosion caused.

When the bird population exceeds the number that can naturally be supported by available habitat, management interventions, such as culling, may be necessary to maintain a healthy and aesthetically pleasing environment. These interventions can often create a rift in the community and lead to conflicting views between some residents and the City of Cape Town.

Conflicting interests occur when some members of the public feed the ducks, while others request that the City of Cape Town deal with the overpopulation. Some residents don’t want animals to be removed because they grow fond of the ducks or have concerns over animal welfare.

You can make a difference

You can make a difference by educating your community about the detrimental effects of artificial feeding. This matter requires cooperation from everyone, but the solution starts with each individual. Despite the City erecting signs like the one below at several dams to discourage the feeding of ducks, feeding still continues. Adherence to official requests like this one is an active step in setting an example and showing respect for the environment we all share.

Why is artificial feeding harmful to birds?

Although our intentions are well-meant, we are doing more harm than good for the following reasons:

Remove the incentive by replacing lawns with natural vegetation and stop feeding birds. The birds will not disappear when no longer fed, but a more balanced and healthy environment for all to appreciate will be created.

Families can still visit dams, ponds and parks to enjoy viewing the birds. Children should be encouraged to learn more about birds and their natural habits. Communities should make decisions that are in the best interest of animals and not themselves. If we are really serious about conserving nature, we should put nature first.